While I was in California visiting my family earlier this month my sister drove me down Florence Avenue in Sebastopol. WOW! There is some wonderful sculpture there! Mimi drove me back so I could take these photos: 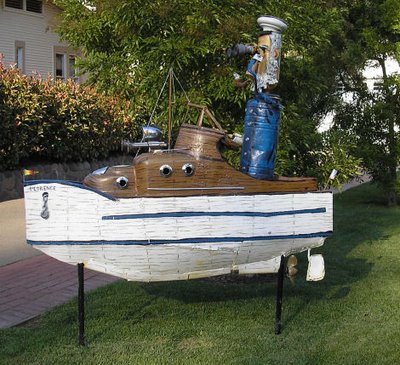 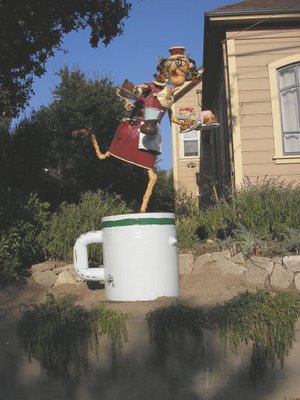 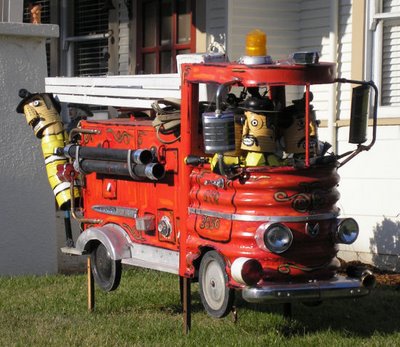 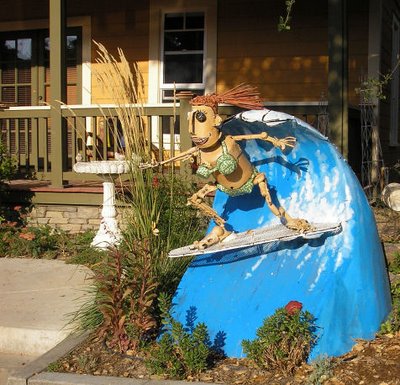 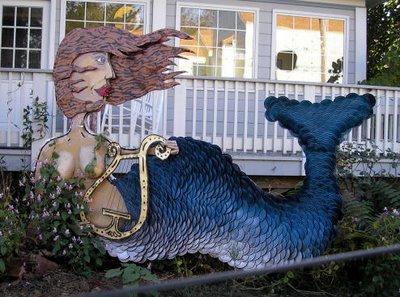 The sculptures are by Patrick Amiot and his wife Brigitte Laurent. They have a website with much more information and more pictures here: http://www.patrickamiot.com/. Click on “Artwork” and then “Public” on the menu more pictures of his outdoor works.

Patrick Amiot is an artist with a gypsy soul. His work ranges from quirky to folksy, whimsical to zany. In 1997, he and his wife, Brigitte Laurent, sold most all of their belongings, left behind their artists’ loft in Montreal, and drove across America in a motor home with their two young girls.
Their goal was to move to San Francisco, but they were turned off by the high cost of living. So they bought a fixer-upper in Sebastopol, a haven for free spirits. It seemed like a perfect match.
For five years, Amiot toiled in relative obscurity in his backyard studio —
sending his work to three or four one-man shows a year in Toronto, Montreal, Vancouver, New York, Chicago and Nashville. He missed the amenities of a big city. He felt isolated and depressed. And he had to borrow money to help pay the mortgage.
Then something strange (even by Sebastopol’s funky standards) happened. A year ago, Amiot built a 15-foot tall sculpture of a grinning fisherman posing with a large fish. He put the brightly painted piece in front of his one-story house on Florence Avenue. The fisherman — made from old vacuum cleaners, a wheelbarrow and a barbecue — was lit at night.
“I was the outsider on the street,” said Amiot, glancing at his paint- spattered shoes. “I was the weirdo until I put that out front, and then I became the artist. Cars started slowing down. People began talking about it. From that, came the idea of doing others.”

That is from “There’s art on our lawn: Patrick Amiot takes junk to new heights and finally finds peace in Sebastopol” by Jim Doyle ~ San Francisco Chronicle ~ May 17, 2002