Our son Noel Clayton wrote and posted this on Facebook on October 31, 2012. I have his permission to share it, and I added the photos of Noel and Bill…

I missed it. Somewhere in the hustle and bustle of everyday life, a milestone came and went without comment.

Many runners will tell you of the healing power of running, that when we get out on the road we can let go of all the little stresses and worries in our life and just live in the moment for a little while. But sometimes it backfires. Sometimes, on a solo run in the rain, your mind begins to wander, and you remember something you have tried to forget.

It was a date that I never marked on a calendar, the answer to a math problem done entirely in my head because even as I worked it out I knew I didn’t want to remember it. Back in January, I realized it had been 17 years, but I couldn’t let it go at that. You can’t ignore the extra days. So, 17 years and 105 days later, on an unremarkable day in August 2012, my brother’s absence from my life surpassed the length of his presence on earth and I was mercifully unaware.

But the memory caught up with me, and I found myself dodging puddles and wondering what my life would be like if he hadn’t swallowed those pills over 17 years ago and ended his own life. Would I still be me without the absence I’ve lived with for so long? And what about my family? My parents were always activists, but would they have become such seemingly tireless crusaders in support of a beloved and still living son? How many families are better off today because of the outreach, support, kindness and courage they have shared so generously. A flame not sparked, but certainly fanned by their loss.

Without the work that they have done, would this state be on the verge of fully legalizing gay marriage next week?

But then I remember that mischievous grin, that boundless energy, that incredible stubbornness. I remember the boy who could never give up on an argument, no matter how absurd. The 13 year old who organized a walkout of fellow students to protest a war. And I remember the young man who stood up in front of a crowd just days after he was brutally beaten because of his sexuality and told them that no one should be forced to bear those scars. 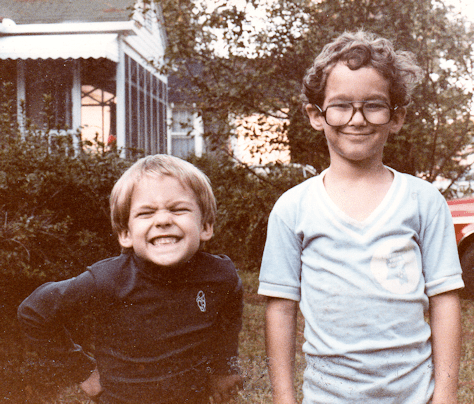 And I know that the world cannot possibly be a better place with him gone. The brother I remember would not have settled for 17 more years of being a second class citizen. He would have fought the crusade himself and brought us all along with him.

Those who know me will know that I have not taken on the role of a crusader. I do my part in subtler ways and make an art of silence. But today, with this forgotten milestone weighing on my chest and the image of his face before my eyes I can’t stay silent.

So I’m asking you all to cast your votes to support marriage equality in Washington and Maine and Minnesota and Maryland. And to support candidates who will stand on the right side of history on the issue of gay rights. Because it is time. It is long past time for us to stop treating people as something less simply because of who they love.

It is time to make a change.

My reply:
Noel, I am almost speechless (rare, I know) and in some tears. I’ve said often that you were never supposed to be an only child, and wondered who we all would be if Bill had lived. Thank you. This is a gift. Not just for me and your dad Alec but for all the lives you touch with this. I’m always proud of you for so many things, and this is one more reason of the many. love, mom

And someone else replied:

Dear Noel,
I know you won’t agree but, marriage is a man and a woman.

After several shocked responses to this, calling it out as a horribly hateful post, Noel wrote:

Hi J,
We don’t actually know each other. You ended up on my friends list because you are …, and at some time in the past I was less selective in accepting friend requests.
I think you might feel like you stumbled into a hornets nest. You might be tempted to walk away, ignore all the comments, or even unfriend me. I certainly was tempted to do so myself. But I hope you don’t. I won’t either.
So, rather than responding to where and how you chose to make this comment, I will try to answer what you said. I hope you will do me the courtesy of hearing me out.
Love comes in many forms. Just in these comments you can see the love of a wife for her husband, and parents for their child, and the love of friends protecting each other. (Some perhaps with more ferocity than is strictly necessary, but we fight for those we love.)
And marriage too has come in many forms. At various places and times in history, marriage has been allowed between man and woman, but also between man and child, or two children. Between man and several women. Between dead man and living woman. There are marriages in the Bible that are absurd or even abhorrent by today’s sensibilities.
Marriage is a cultural construct which changes with the time. It is a contract not just between two people, but between those people and the state. The couple make promises to each other to live together, to support each other, to love each other. The state, by affirming that contract, endows various benefits and responsibilities on the couple. In our country that includes the right to inherit property, to make important medical decisions, to visit your spouse in the ICU, to receive government benefits like social security and military benefits, to be covered by an employer sponsored medical insurance plan… The list goes on and on.
Before marriage equality was established, some of these things could be achieved by a same sex couple. But they had to fight for each one individually, sometimes by complicated and expensive legal procedures. Whereas a straight couple could receive all of those benefits automatically, simply by filing a single marriage license.
The state made people in loving and stable same sex relationships second class citizens. I am glad that has changed.
I celebrate my friends and family who have found someone to share their lives with and I want them to be able to share their lives in all the ways I share mine with my wife.
I recently rejoiced when a friend announced her engagement. There was a time, not so long ago, when society would not recognize her upcoming union. Not simply because she is marrying another woman, but because she was previously married to a man. A man who was abusive and controlling. Not long ago, she would have been stuck in that previous marriage because as far as the state was concerned, she would have been the property of her husband and had no right to end their marriage without his consent. I hope that we can agree that this change in what it means to be married is a good thing.
Any time loving, supportive, adults choose to marry, it should be celebrated, not stigmatized. Their love does not diminish yours. Their marriage doesn’t impinge on yours. How does it harm you that a loving couple wishes to form a family?

Noel Clayton It makes me proud to know we raised such a smart and compassionate son.

Ditto what your dad, wrote, Noel. Not that it is any surprise that you are.