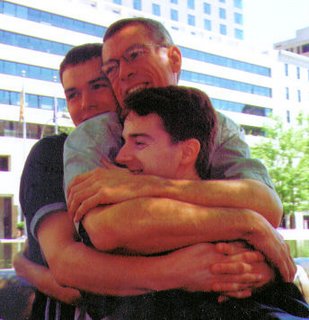 Jason Seymour, Steve Schalchlin and Jason Hungerford
in a warm hug on a beautiful day in Washington DC
during the Millennium March for Pride week 2000.

We were & are involved in Youth Guardian Setvices
which was launched by Jason Hungerford in January 1997.

ITHACA — Fifty same-sex Ithaca couples who have lost several rounds in state court seeking permission to marry will be heard by the New York State Court of Appeals today.

The Court of Appeals will hear the case of Jason Seymour et al. v. Julie Holcomb as City Clerk of the City of Ithaca et al., and New York State Department of Health, at 2 p.m. today in Albany, according to Jason Hungerford, one of the plaintiffs. The couples have been seeking the right to marry since about two years ago when they first took legal action against the City of Ithaca — with city officials’ backing — after they were refused marriage licenses.