About 500 protesters drowned out 13 neo-Nazis Monday at the Capitol. The two groups were separated from each other by helmeted, crowd-control-equipped troopers. Throughout the day, about 200 troopers were on duty, the largest force of Washington State Troopers gathered there since the 1970s.

“The State Patrol did a great job,” said Bryn Houghton of Olympia, who as a counter-­protest dressed as a clown with an Adolf Hitler-style mustache. “I thought (the National Socialist Movement) did a great job of humiliating themselves. You couldn’t hear them and when you could it was illogical, as well as being bigoted.”

This morning Alec emailed this to friends and family:

Subject: We Got Nazis

While our friends and family in the South and East are being plagued with floods and heat, we out here in the Pacific Northwest are plagued with Neo-Nazis. The National Socialist Movement (the self-identified Nazi party in the U.S.) has chosen Olympia, Wash., as a target for recruiting and building a base for what they claim will be a takeover of the West. They’ve shown up here on numerous occasions since January, wearing their brown uniforms and waving big red swastika flags. Usually when they show up they are in groups of six or seven. They filed for a permit to rally on the state capitol July 3 (yesterday) and boasted that Nazis from all of the Western states were going to converge on us.

Gabi and I joined in with a local group called Unity in the Community to counter their message of hate and exclusion with one of love and acceptance. We put on a big festival on the day before the Nazi rally with the theme of celebrating diversity, with speakers and entertainers representing all races, religions, etc. It was a wonderfully joyful day in the park — the only downside being that I got slightly sunburned.

The next day the Neo-Nazis showed up as planned. Two hundred policemen stood between them and 500 counter demonstrators who wore clown outfits and rang bells and beat on drums so the Nazis couldn’t be heard. There were only 13 of the brown-shirted hate mongers. They shouted in anger, but no one could understand what they were saying. Meantime, the counter demonstrators were dancing and drumming and generally having a grand old time, and making the guys in the brown shirts look really stupid. One young woman was wearing a T-shirt with a picture of Hitler with a clown nose and the legend, “Neo-Nazis are So 1938.”

The day’s activities ended with a sober wind-down with a candlelight vigil in memory of hate crime victims — specifically two local youth, including our son, Bill. The other youth, Bob Buchanan Jr., was a young Euro-Asian man who was murdered by Neo-Nazi skinheads in 1992. Gabi was one of the speakers at the vigil, and she did a wonderful job.

We may have succeeded in making the bad guys look silly and inept, but they promised to be back, and they surely will. They don’t give up easily.

This is what I said at the vigil after leaning Bill’s last high school photograph against the sound system: 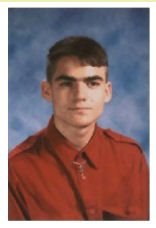 My husband Alec and I had two sons. Our youngest, Bill, came out to us as bisexual when he was fourteen years old. When he was seventeen he was very out. He was a member of Olympia High School’s student activist club when they invited Col. Grethe Cammermeyer to speak for women’s history month. All hell broke loose in the area then.

Soon after that Bill and his friend Sam were assaulted in a hate crime. Bill committed suicide about a month later because he lost hope that he would ever be safe.

My father was a German Jewish refugee. The hate he faced as a child in Germany is the same hate that my son and Bill and his best friend Sam faced on a street by Olympia High School on April 6, 2005.

The four young men who attacked them were the pawns of individuals who made them think their actions were right, and of a culture that does that.

Someone once asked me what I believed causes this to happen. My answer was evil. Yes I believe in monsters. Human ones. Not the ones who assaulted Bill and Sam – but the ones who twisted their spirits and make them think it was okay.

When they beat Bill and Sam they did not see them as human. And in the very act they lost their own humanity.

Hate doesn’t grow in a vacuum. It can’t grow unless we allow it to. It grows on fear and it grows on silence. By speaking up now as a community we have said not here. Not now. By that very act we are healing from what they bring here.

“Suffering ceases to be suffering in some way at the moment it finds a meaning.”

People sometimes ask me how I survived Bill’s death. My answer is what makes you think I survived? They ask me why I am not angry. I answer them what do you think fuels me? Anger can be negative or positive depending on what you do with it. I’ve chosen to put the energy from my anger about what happened to Bill into working for change – hoping to help end ignorance and hate and fear – hoping to open people’s hearts and minds.

I want to recognize that this is a time when we all are aware of the vulnerability of our country and our people after the attacks on the east coast. I have been reading about people feeling that those acts of terror have stripped away the sense of safety that we as a nation felt.

While I acknowledge that is true in some important ways, I would also like to say that it has been a long time – if ever – since many of us felt safe, when so many people in this country and in our world are targeted, harassed, beaten and killed because of bias based on their real or perceived sexual orientation, gender identity, race, religion, ethnicity, ability, etc. Many of us have been aware that we have lived in a war zone all along.

Six years ago my youngest son was beaten because he was bisexual. He committed suicide a month later because he believed he lived in a world filled with hate he could no longer face. When I watched the news and heard that people were throwing themselves from the windows of the World Trade Center as it was being destroyed, I thought of my son Bill.

This time of year is usually very grey in the Pacific Northwest, but we have been blessed with some sunny days. Today I was able to see the Olympic mountains across Puget Sound – they are covered with snow and quite stunning.

The sight of those mountains made me remember visiting Mount Saint Helens a few years ago with Alec and Noel and Bill. When we visited, the volcano had erupted years before our trip. The power of the destructive forces that had been unleashed still seemed overwhelming and un-survivable. Whole pieces of St. Helens were gone, as were people, creatures, whole forests… A lodge by the edge of Spirit Lake was buried there in the water that rose from all the trees that jammed and flooded the lake.

The mountain was forever changed; the losses were huge. And yet…and yet there was life returning to the mountain. A new tree pushing up here, a little animal there. We were delighted and awed by the healing that was taking place. Nothing would ever be the same, but something wonderful was growing out of those ashes.

And here I am, thinking of Bill, and of our losses. And seeing that it is SO huge, and that our lives are forever changed. The power of the destructive forces that were unleashed on Bill were overwhelming and un-survivable for him. And now, nothing will ever be the same for us.

And yet, there is healing – and there is something quite amazing happening – out of those ashes. You are all part of it… and knowing you all floods me with hope.

All my love… Gabi