Please take action on this!

Here is the press release that went out today:

The Olympia City Council wants to repeal our Nuclear Free Zone. Tuesday, Sept. 9 they plan to repeal it without allowing for public dialogue or testimony. Supporters of the Nuclear Free Zone ordinance are asking people to show up at the Council meeting to demonstrate their support.

The city’s Nuclear Free Zone (NFZ) ordinance was adopted by the Council with great support by the members of this community in August, 2005 on the 60th anniversary of the U.S. nuclear bombing of Hiroshima and Nagasaki. More than 90 percent of the community voiced support at that time.

Here are some why repealing the ordinance is a bad idea:

The NFZ is the ultimate example of taking local actions to address global concerns. Such actions should be embraced, as solving big problems always come about through many small solutions coming from the grassroots, rather than one big solution imposed by fiat from the top down.

Repealing the NFZ sends a message of hopelessness and despair to the community. It says that we as a community are powerless to address one of the most significant challenges of our time. Is this the message we want to send to our young people?

Supporters are calling on the public to join a rally and procession Sept. 9. The rally kicks off at the Knoll, 5th avenue, north side of Capitol Lake, Tuesday, Sept. 9 at 4:30 p.m. At 5 p.m. there will be a sidewalk procession to City Hall to welcome city Councilmembers and staff with a beautiful display of support for our Nuclear Free Zone at 6 p.m. Council meeting starts at 7 p.m.

People are asked to bring sunflowers, musical instruments and creative signs and props.

So, please help get the word out.

Send the press release above to people in Olympia — and ask them to take part on Tuesday. 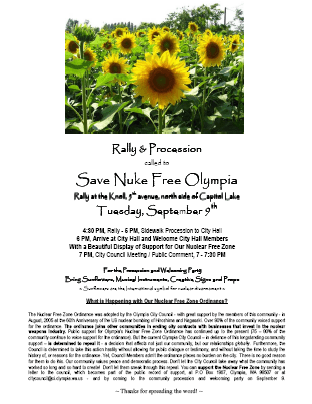 Also, we are creating a large bank of names of folks who support the Ordinance! Will you add your name to this list?

Here is the plan — PLEASE DO IT AS SOON AS YOU READ THIS, BECAUSE TIME IS SHORT!

Molly will add your name to the list that list will be presented to the City Council onTuesday night.

And join with us on Tuesday. Alec and I will be at City Hall for the Council meeting.

1 thought on “Olympia – Our Nuclear Free Zone is at risk! Please help.”