Safe Schools Coalition and our son Bill were mentioned in this report:

On Friday, in a hearing before the Idaho Senate State Affairs Committee, Senators Nicole LeFavour (D-Boise) and Charles Coiner (R-Twin Falls) introduced legislation prohibiting employment, housing and education discrimination based on an individual’s real or perceived sexual orientation or gender identity. The bill proposed amending the Idaho Human Rights Act to include these protections. This wasn’t the first time Senator LeFavour has introduced such a bill and, unfortunately for supporters who were hoping to see it enacted this year, it won’t be the last.

In a fourteen-minute, at times emotional, presentation, Senator LeFavour simply asked that the committee acknowledge that the issue merits further discussion and to print the bill. Offering to stand for questions upon closing, members of the committee responded with silence. No questions. None.

The consequences of tacitly endorsing discrimination can be devastating, especially to kids. 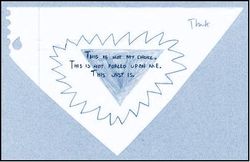 This artwork was created by a young man in Washington state who committed suicide after being mercilessly harassed at school and was published in a Safe Schools Coalition report.

So back to the debate and bringing in the artwork above again, most people who have grappled at one time or another with questions of sexual orientation will tell you as the young man says, “This is not my choice. … This just is.”

By omission we have tacitly endorsed discrimination. On her blog, LeFavour described it as “losing ground in silence.”

Thank you to Idaho Senate State Senators Nicole LeFavour (D-Boise) and Charles Coiner (R-Twin Falls) for continuing to refuse to stand in silence. My love to you both, and to all who stand and speak with you.

And thank you to Beth Reis for letting me know about the article.
Go to Safe Schools Coalition website, and also In Memory of Bill Clayton

Please read all of ‘By Omission’
The MountainGoat Report: News from the ledge … life and politics in Idaho ~ February 21, 2009