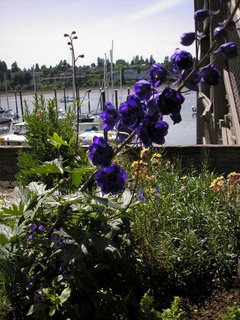 Alec and I walk at Percivals Landing in downtown Olympia at the botton of Puget Sound. Here are some flowers in a planter there yesterday.

We had heard there had been protesters there the night before, because of the ship there ~ the SS Pomeroy ~ being loaded and heading for Iraq. 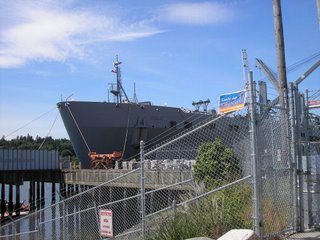 We saw a couple of protesters and one Sherrifs Deputy vehicle watching them but it was pretty quiet. More protesters were there that night.

OLYMPIA – Twenty-two people were arrested Tuesday in one of the most volatile confrontations yet between anti-war activists and police officers guarding a military cargo ship docked at the Port of Olympia.

Read the whole article: Port protests escalate
22 arrests made in demonstrations against military cargo ship
FRONTPAGE : » News » May 31, 2006
BY SCOTT GUTIERREZ » THE OLYMPIAN